Why Is Some Wine Aged in Wooden Barrels? 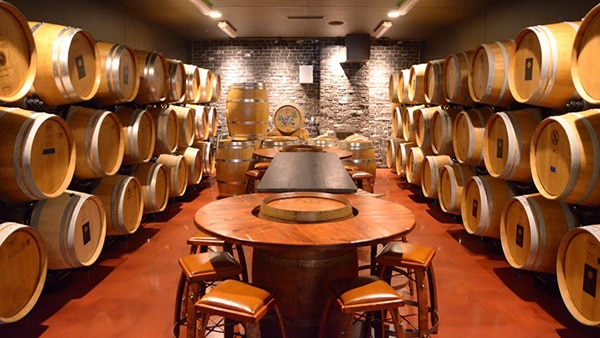 The wine barrel is having a moment. It seems every home design magazine, antique shop, and Pinterest board features wine barrels repurposed into end tables, dog beds, and other pieces. But before the barrel was relegated to furniture and flower pots, it played a critical role in the winemaking process.

The Importance of Aging Wine
Before it can be bottled, newly made wine goes through a period of maturation, a process during which it undergoes several character and sensory changes. This can take anywhere from several months to a year or longer, depending on the type of wine. During this process, many winemakers age selected wines in wooden barrels. In France this process is called elevage, or upbringing.

“The wood serves two key purposes,” says Andy Codispoti, Director of Winemaking and Distilling Operations for Gervasi Vineyard. “It allows the introduction of a small amount of oxygen at a controlled rate over time that acts to soften the feel of the wine on the palate and it contributes flavors and aromas to the wine’s character.”

Codispoti likens the flavoring function of a wine barrel to an inverted tea bag with the liquid extracting characteristics from the wood encasing it. Barrel aged wine derives noticeable taste and flavor profile from the wood, so batches stored in other types of containers have noticeably different characteristics.

“It can be argued that the barrel aging process with wines is an art as much as it is a science,” said Codispoti. 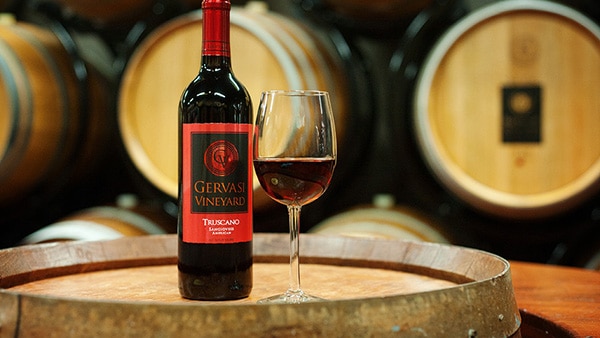 Does the Type of Wood Matter?
The type of wood used in wine barrels can have as much effect on flavor as variables like soil and climate. White oak is the go-to choice for many winemakers as it is for Gervasi.  It may be sourced from different regions to help create the desired profiles; French and American oak are the most popular with lesser amounts coming from Eastern Europe.

Gervasi’s Bellina Chardonnay, for example, is aged in predominantly French oak barrels that are produced specifically for Chardonnay. The wood has as a very tight grain which allows for slower extraction of oak character. This produces better integration of barrel traits with the wine. Gervasi red varietals, such as Truscano Sangiovese, are aged in a blend of French, Hungarian oak, and domestic barrels.

“We design the barrel blend specifically to develop a cuvee of barrel contributors tailored to the character of the grapes,” says Codispoti. “We want compatibility with the varietal’s personality allowing it to shine through the oak framework.”

Flavors extracted from the wood subtly act on the wine as it ages inside the barrel, helping to develop the desired aroma, structure, texture, and flavor profile.

Codispoti stated, “Barrel aging can be likened to sending the wine to finishing school. It enters the barrel young and rowdy and graduates refined and polished.”

American oak lends notes of vanilla, coconut, and toffee, while the French variety can deliver notes of clove, spice and nutty flavors. The size and age of the barrel also matters, with smaller, brand-new ones most effectively imparting their oak flavor into the wine. Gervasi uses 225 liter barrels of varying ages. Paralleling the example of a tea bag, each subsequent batch aged in a used barrel will see less oak influence than the first.

“We exploit this feature of barrel decline to produce a blend of barrel ages within a given wine,” Codispoti explained. “The new barrels contribute higher levels of oak character, while the older barrels allow preservation of varietal features. In the end, it is the combination of these actions that produce Gervasi’s well balanced wines.”

The maturation process is fascinating, but you don’t have to understand the ins and outs of aging wine to appreciate a glass of delightful wine. Gervasi Vineyard, Ohio’s premier winery resort, produces and bottles over 20 varietals of award-winning wines to enjoy!