Waking the Vineyard from a Long Winter’s Nap 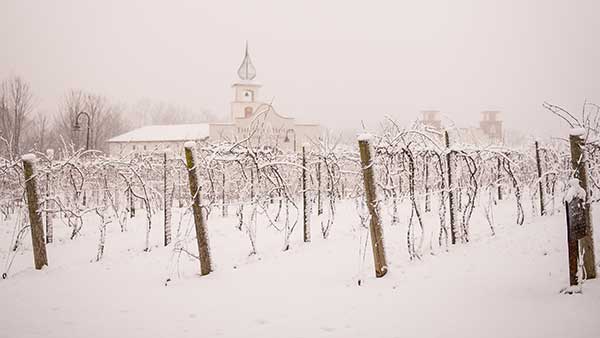 Waking up can be hard to do—especially after a long winter’s rest.  Gervasi Vineyard (GV) is getting ready to awaken the dormant North and South vineyards for the next growing season.  There is a lot to do to reinvigorate the vines in order to generate wonderful plump grapes for harvesting.  Learn what goes into maintaining a vineyard in Northeastern Ohio all year long. 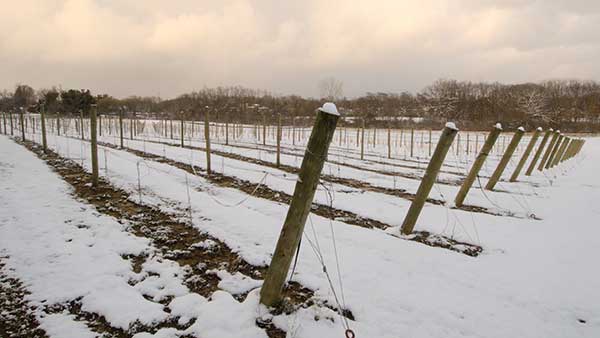 Working Through the Winter Blahs

The nearly six acres of vineyards may look like they are resting through the winter—but instead, they are doing some internal work to prepare for production.

The vines are multitasking during this time. First, they need to hoard nutrients and cut off their water supply during the cold weather. Too much water inside the plant’s cell tissue can allow freezing which can damage the vine.

Root flush (tiny root hairs) start extending downward into the dirt to sip nutrients from the soil to prevent freezing. New buds that develop during the growing season mature during winter and then become the new leaves and fruit in the spring.

“We have five crew members in the winery,” said GV’s winery manager David Smith. “Three people perform most of the daily tasks in the winery and help in the vineyard with dormant and growing season pruning, shoot thinning and leaf pulling. One person assists with vineyard and winery day-to-day operations as well as applying necessary sprays to the vineyard.” 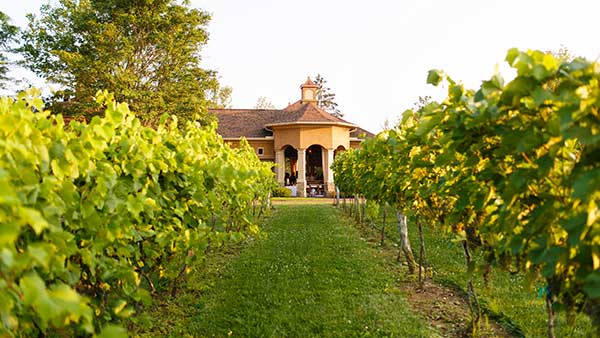 The first step to fully awakening the vineyard involves getting a nice trim.  Dormant pruning begins in February once the threat of severe cold temperatures is mostly past. Pruning will remove most of the previous season’s growth and will leave only about two buds per shoot — around forty buds per plant.

“If we leave too many buds then the plant will push out too many grape clusters, and it won’t be able to fully ripen the grapes by autumn,” GV’s winery manager David Smith said. “If we leave too few buds, then our crop will be low, and we won’t be making efficient use of the acreage.”

Soon after pruning, vines will begin to push water and nutrients into the buds. As the buds swell, they eventually break open to reveal tiny bright green shoots. After a few weeks of rapid growth, white flowering clusters appear bringing life into the vineyard. The flowers will transform to small berries in June. These berries will eventually become grapes.

Once the buds begin to swell, they are susceptible to freezing temperatures and even heavy frosts. Light frosts usually will not bother the vines too much. It is a real concern from April into May that a sudden frost event could destroy a significant amount of the new shoots before they can make grapes.

Smith said, “If this does happen, the vines have a back-up bud inside the original that died from frost. This secondary bud will begin to grow and will usually bear fruit. However, the fruit from the secondary buds is usually not as large and sometimes the quality is lower compared to the primary bud’s potential. If a second frost event kills the secondary buds, then we won’t get any crop at all and it will be a total loss for the year. The vines will still be able to push out new shoots so that they can grow leaves and survive until the following spring to try again.” 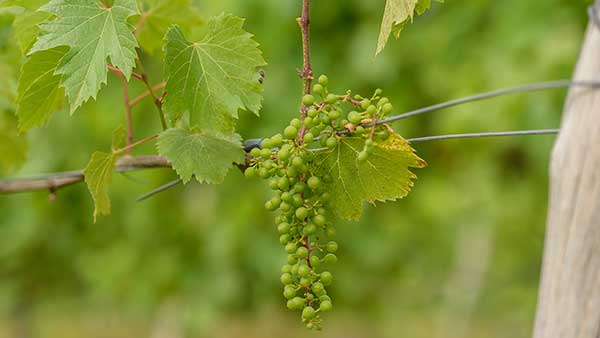 GV has purposely selected grape varieties known for their cold hardiness and flavorful profiles to allow them to grow well throughout Ohio’s seasons. Because these varieties are so cold hardy, GV has to rarely do much to prepare them for winter, and typically will allow them to naturally go dormant before pruning starts again in February. Once these particular vines are fully dormant, they can withstand air temperatures down to -10F to -20F without sustaining much damage. 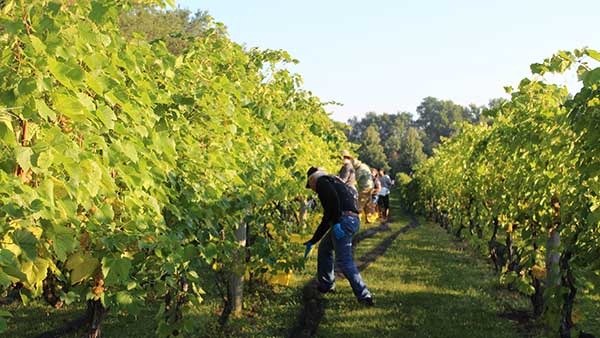 Time to Pick the Grapes

After the growing season (April through September) is over, it’s time to reap what was sown.

Smith said, “Typically, the harvest of our grapes is sometime during the first two weeks of September. All the grapes are picked by hand. We usually have four or five different picking days in which we harvest individual blocks from our vineyard. Our harvest crews consist of the winery and distillery teams as well as a significant portion of community members that like to be involved with making some of their favorite wines.

“The grapes are picked into bins that get loaded into a refrigerated room to cool them down overnight. We have three different varieties that we grow on property and each one gets treated a little differently. “

Aromella gets picked first and these grapes are hand-sorted to remove any “MOG” (Material Other Than Grape). After sorting, the grapes are loaded, whole cluster, into a press to squeeze out the juice and pump it into a tank for fermentation.

Marquette gets picked second. After sorting out the MOG, these get sent through a machine that removes the stems and lightly crushes the grapes. The crushed grapes are then pumped into a fermentation vessel.

Frontenac Gris gets picked last. After sorting out the MOG, they get sent through the de-stemmer/crusher and then the crushed grapes will go to a holding tank. The crushed grapes are held cold for a few days so that the juice can soak up color from the skins. Eventually the grapes get pumped into the press to squeeze out the liquid to get a rose-colored juice. Then the juice is ready to ferment. 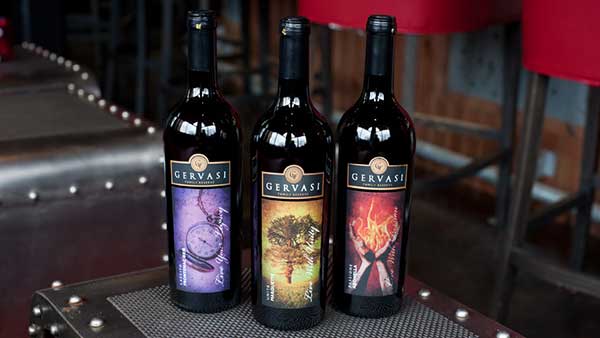 The Fruits of Labor – The Wines

After harvest, the grapes become what customers know as the award-winning wines offered at Gervasi’s restaurants and Marketplace boutique. Smith said the three wines made from GV-grown grapes include Unita, Lascito and Aromella, which are the names of Gervasi’s “Family Reserve” wines.

“Our Marquette wine (Labeled as “Unita”) will spend around 12 months in oak barrels aging before it is bottle-ready. The Frontenac Gris (Lascito) and Aromella (Passione) do not require any barrel aging and those will be ready to bottle within 6 months of harvest,” Smith said.

Want to try one of these delightful Family Reserve wines? Visit gervasivineyard.com/wine/ to learn more about all of the wines offered at Gervasi Vineyard. Another great way to learn about Gervasi’s wines is to attend a wine tasting event or sample the wines at The Crush House Wine Bar & Eatery.

GV is a premier destination winery resort offering over 30 varietals of wines including Italian wines made and bottled exclusively for GV and are served in all of the restaurants at Gervasi Vineyard.