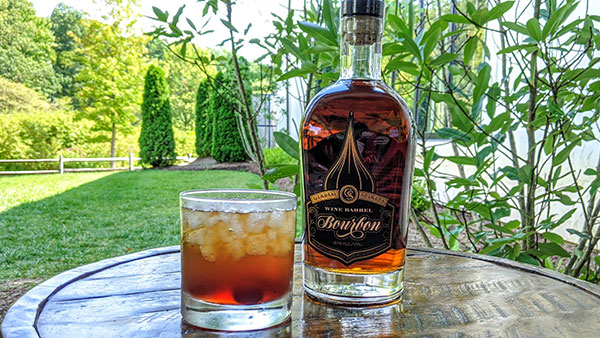 If you ask a bartender to list a couple of classic cocktails, the Manhattan is undoubtedly going to appear on or near the top.  It’s iconic, despite being over a hundred years old, and still finds ways to make a showing on a large percentage of cocktail lists around the world.  The Manhattan is also one of those drinks whose origin is murky at best and, quite often, a tall tale.

One of the most popular stories around the origin of the Manhattan, is that it was created at the Manhattan Club in New York City for a party being hosted by Jennie Jerome (Winston Churchill’s mother) in the early 1880’s.  This story makes for a great tale because it seems right that the drink and club shared the same name.  On top of that, with world leaders and celebrities involved, it must explain how the drink became popular.  Unfortunately, despite how widely-told this story is, it is probably false.  Jennie Jerome (aka Lady Randolph Churchill), was pregnant and not in the U.S. at the time the supposed party took place.

The Manhattan was much more likely to have been invented by a gentleman who went by the name “Black” in the 1860’s at the Hoffman House (another famous club at the time).  The now-classic blend of rye whiskey, sweet vermouth and bitters made its rounds through the city with relatively little fanfare at first.  By 1891, however, it was popular enough to have made its way into The Flowing Bowl, a published cocktail book by William Schmidt. The Manhattan was also starting to expand its definition by this point, too. While the very first versions contained rye whiskey specifically, people generally started focusing more heavily on bourbon.

Most bourbons are made in a copper still (although not required). The distillery at Gervasi Vineyard uses a copper still to make bourbon as well as other spirits. To be legally called bourbon, the recipe, known as the “mash” must be at least 51% corn and the product must be made in the United States. The mash consists of 70% corn and the rest is a mix of barley, wheat and rye. All ingredients are heated with water in a mash tun (vessel). During the cooking process, enzymes convert starches into sugar. This process allows the yeast to make alcohol. Fermentation usually lasts three to four days maintaining a temperature between 75 to 90 degrees.

A first stripping run in a copper pot still will create what is called “low wines”. These low wines are redistilled at a maximum proof of 160. From that point the mix cannot enter a barrel until the low wines reaches 125 proof (or less). The spirit must be aged for a minimum of two years to earn its status as a straight bourbon. Though there is no age requirement for a traditional bourbon. For Gervasi Spirits Wine Barrel Bourbon, this bourbon is finished in one of Gervasi’s famous wine barrels, which adds complexity and depth that make it a truly unique experience.

With the popularity of bourbon, the distillery team at Gervasi Vineyard wished to create distinction and differentiation in Gervasi Spirits’ bourbon products, while respecting the traditional expectations in character. The distillery team hand-selects the finest aged bourbon, while the winery team hand selects wine barrels based on the country of origin and the legacy wine that last matured in the barrels from their red wine program.

The barrels are transferred to the distillery at Gervasi Vineyard upon emptying for filling with a four-year-old bourbon. The bourbon will age further in the wine barrels for about eight months before making the final blend and bottling. The marriage of the two allows additional finishing and imparts a bias from the legacy wine’s character. A more rounded and softer impression makes the Gervasi Spirits Wine Barrel Bourbon unique as it adds hints of sweetness, spice and barrel notes.

According to Shae Pridemore, head distiller for Gervasi Spirits, “The Wine Barrel Bourbon is a fantastic collaborative effort between our winery and distillery teams to make a world-class spirit. We saw an opportunity to integrate our wine and bourbon crafts through the use of our decommissioned wine barrels to finish-age our bourbon.  We are proud of this unique spirit which recently won a Bronze Medal in the 2020 Great American International Spirits Competition.”

So however your take your bourbon, you’re bound to appreciate Gervasi Spirits Wine Barrel Bourbon. Visit Gervasi Vineyard to enjoy these fine recipes which feature GS Wine Barrel Bourbon in both classic cocktails as well as contemporary libations. 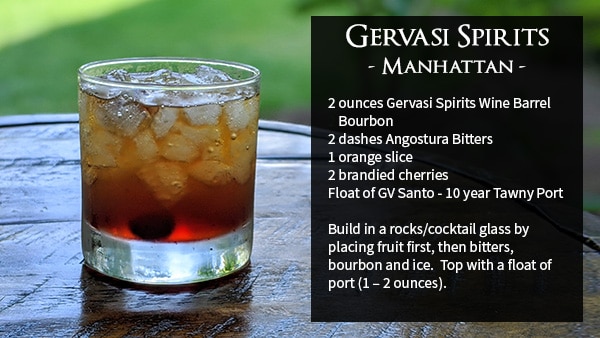 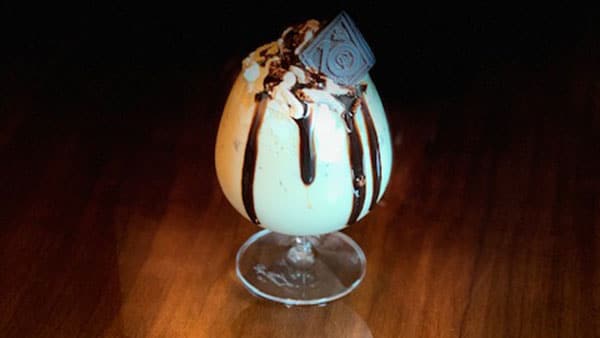