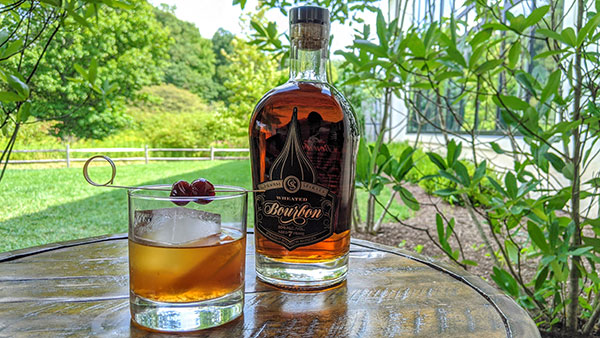 What makes the Old Fashioned “old”?  For hundreds of years, the drinking of distilled spirits was a relatively simple affair. Up until the 15th century, distilled spirits were almost exclusively used as a medicine and drunk ‘neat’ or without any additional ingredients (wines and beers were preferred for everything else).  Spirits were just barely starting to be drunk for enjoyment during social events in the 17th century.

It wasn’t until the late 18th century that spirituous liquor starting finding its way into taverns, ships and homes for the purpose of drinking as a source of entertainment.  With this new exposure and availability, many people started looking for ways to make the drinking experience more palatable. The term ‘cocktail’ came to be in the early 1800’s and was defined as a “concoction of spirits, bitters, water, and sugar.”   The unspoken rule of the aforementioned ingredient list was that spirits always meant “whiskey” or “bourbon”.

It was commonplace to walk into a saloon or tavern looking for a cocktail and be served a glass containing a sugar cube soaked in bitters with a bottle of bourbon and a splash of water on the side.  It was a “pour it yourself” affair and would be charged based on how much of the bottle was used.  And things stayed this way for quite some time.

After the Civil War, as the economy was rebuilding, many people started having more time and resources to devote to the creativity and profession of bartending. This is when the world of spirits and cocktails really exploded. People were experimenting; new trends and flavors were popping up everywhere.

Unfortunately, this didn’t suit everyone’s palates. Some longed for the way things used to be: the old way of drinking. It is out of this longing that the Old Fashioned was cemented into the pantheon of cocktails. Since then, the Old Fashioned has had other things added to it – orange slices, cherries, etc.

It isn’t quite the “old fashioned way of drinking” anymore. But the Old Fashioned does still make for a fine cocktail that serves as a wonderful way to express fine whiskeys and bourbons. The Wheated Bourbon manufactured by Gervasi Spirits offers a unique twist on the craft spirit. 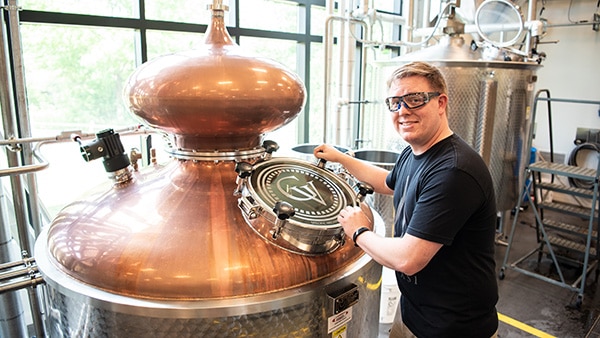 How is a bourbon made in the modern-day era? Copper stills (although not required) are one of the icons that many people think of when they picture a fine bourbon. The Still House at Gervasi Vineyard features two copper stills in a modern day, state-of-the-art distillery designed for an annual capacity of 25,000 bottles.

To be legally called bourbon, the product must be made in the United States and the mash (or recipe) must consist of at least 51% corn. Typically, the corn is within the 70% range, and the rest consists of a mix of barley, wheat and rye.

Fermentation usually lasts three to four days at temperatures of 75 to 90 degrees. A first stripping run in a pot still will create what is called “low wines”. These low wines are redistilled at no more than 160 proof and from there cannot enter a barrel at more than 125 proof. After a rest in a new charred barrel, it is ready to be enjoyed.

According to Shae Pridemore, head distiller for Gervasi Spirits, “Wheated bourbons are usually sweeter and earthier, where bourbon heavy with rye has notes of fruit and baking spices. Those ingredients are heated with water in a mash tun. During the cooking process the enzymes convert starches into sugar, allowing yeast to make alcohol.”

Gervasi Spirits Wheated Bourbon is a very limited, hand-selected craft spirit scouted specifically to augment Gervasi Spirits’ portfolio with premium products. Received at over seven years of age, Gervasi finished this bourbon at 100 proof to highlight a balance of age and its creamy notes of sweetness, spice cake and toffee. 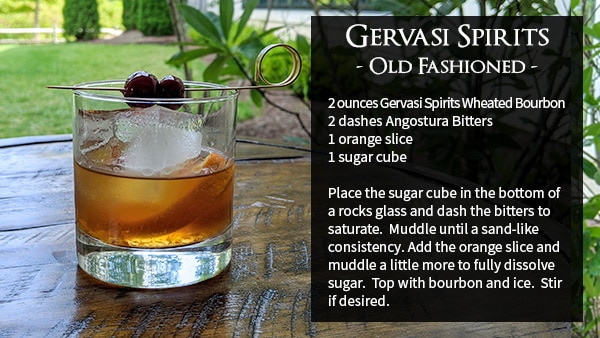 When visiting The Still House at Gervasi Vineyard, order the Wheated Bourbon in an Old Fashioned, or enjoy this craft straight bourbon whiskey neat with flamed lemon. Try an array of handcrafted spirits in a tasting flight–choose any three spirits to sample, accompanied by a salty snack.

Gervasi Spirits are inspired by GV Destinations’ promise to develop new endeavors and products that people will enjoy as much as the vineyard and wines. Visit The Still House to experience Gervasi’s unique bourbons, vodkas, and gins. From classic cocktails to modern-day flavor combinations, there’s something for every palate.