Martinis are everywhere and come in an uncountable number of variations.  It’s one of the few cocktails that even has a piece of glassware named specifically for it.  But how did this come to be?  How did something that started out as a fairly simple drink become so well known that it can be found in every part of the globe?  The answer takes us back to the American West, specifically, during the Gold Rush.

In the 1840’s, prospecting for gold in California was a booming business and people made fortunes. It is believed that one such prospector in Martinez, located just outside of San Francisco, hit it “big” and wanted to celebrate. They went to their local bar and asked for Champagne, but there was none to be had.  So, the bartender offered to concoct a celebratory libation just for the occasion.

This first version, named The Martinez, was a mix of gin, vermouth, bitters and a cherry liquor. The drink was a hit and started making its way to other bars in the area. The drink might have stayed a local tradition, had it not been for one other factor: Jerry Thomas. (The gentleman who would go on to publish America’s first drink book The Bar-Tender’s Guide in 1862).

Mr. Thomas happened to be in San Francisco during the same time period The Martinez was making its rounds. Only a couple years later, he moved back to New York City to open his own bar and orchestrated cocktail-making as a respectable profession.  The drink then started to be referred to as a Martini and made its way into all of the popular bars of the time.  By the time this cocktail was introduced at the famous Knickerbocker Hotel in 1906, the likes of John D. Rockefeller and F. Scott Fitzgerald were readily partaking and further expanding upon the Martini’s popularity.

Initially vodka was made from potatoes because they were inexpensive and readily available. Today the potato has been replaced with cereal grains, though the methods of cooking, fermenting and distilling have relatively stayed the same. The grains are heated up to convert the starch to sugar, which then allows the yeast to consume those sugars, turning it into alcohol. 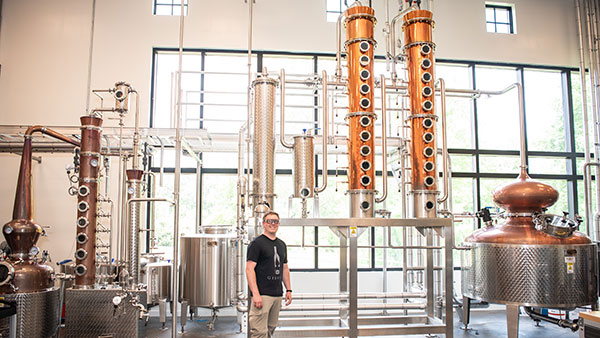 Afterwards, the vodka is distilled on a continuous column still, which purifies and extracts more alcohol then that of a pot still. To be called “vodka”, the spirit must be distilled at 190 proof or higher. Such high proof helps to smooth out the vodka and yields to a more neutral flavor. The boutique distillery at Gervasi Vineyard features two pot stills as well as column stills, used for additional purification when making spirits.

The Martinis of today look much different than the original cocktail creation. Most of these beverages only share the common shape of the glass with their ancestors. The inventiveness and creativity to expand the world’s cocktail repertoire keep the spirit of Martinis alive. 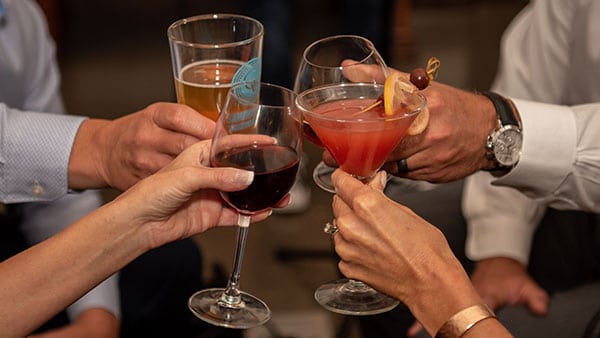 One of the biggest impacts on today’s Martinis is the introduction of flavor-infused vodkas. Gervasi Vineyard implemented this practice with wine. To finish the Sinners Blush Rosé Vodka, the distiller added a touch of wine. By adding this feature, it brings out fruit notes and a hint of sweetness that pairs well by itself or mixed in your favorite cocktail.

According to Andrew Codispoti, Director of Winemaking and Distilling Operations for Gervasi Spirits, “Our desire was to introduce a distilled spirit product that would unmistakably represent the two arenas of alcoholic beverage production at Gervasi to include both wine and distilled spirits. We were attracted to the idea of an estate grown wine melded with our Small Batch Vodka.  We wanted great visual appeal with distinctive aromatics and flavor.”

“After numerous experiments with the estate grown wines, the distilling team concluded that the Lascito wine produced from the Frontenac Gris grape at Gervasi Vineyard was the ideal candidate for this product. It offers an attractive blush color and aroma. In addition, the strawberry flavor lit up the score card in our sensory trials,” said Codispoti.

When visiting The Still House at Gervasi Vineyard, try the Rosé Vodka Sinner’s Blush.  It can be enjoyed neat, over ice, or mixed as in Gervasi’s Lush Blush Martini made with Grand Marnier, lemon juice and strawberry puree.  Another delightful cocktail including this special wine-infused vodka is the Lover’s Plunge. This cocktail for two includes Gervasi’s Rosé, wine, grapefruit, strawberry and is served in a French press with dry ice. Cheers!