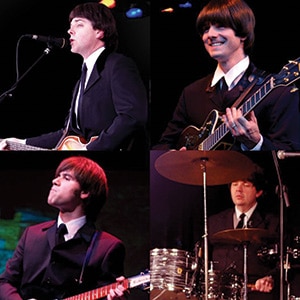 Enjoy a summer evening concert in The Pavilion starting at 8pm. Doors and cash bar open at 7pm.

The BackBeats: Beatles Tribute Band, are proud to be the only Michigan-based Beatles show to have had sponsorship by both of the major classic rock Detroit radio stations (FM 104.3 and FM 94.7) and also by the Rock and Roll Hall of Fame in Cleveland. In 2009, when The Beatles released their highly anticipated video game “Beatles: RockBand”, it was The BackBeats that were hired to represent The Beatles for the release of the game in the Michigan market.

The BackBeats member have traveled the globe performing with various Beatle tribute shows, from the Cavern Club in Liverpool to the famed Carnegie Hall in NYC, and it’s members have opened for such acclaimed international acts as The Beach Boys, The Zombies, Leon Russell, America, Jefferson Starship, Vanilla Fudge, and Peter Noone of Herman’s Hermits, among others and have shared the stage with several members of Paul McCartney’s former band, “Wings”.

The BackBeats is thrilled to return to the Gervasi Vineyard where they will present a “Touring Years” concert, focusing on Beatles song selections from 1963-1966.

Event is rain or shine, tickets are non-refundable/non-transferable.