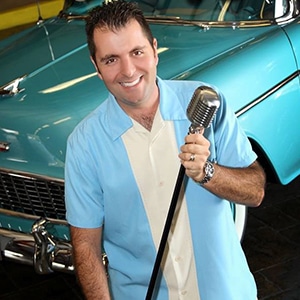 Raised in Canton Ohio, Ryan has been performing since the age of 5. He has performed in an array of Broadway musical productions including A Christmas Carol, Big River, Bye Bye Birdie, Chicago, Evita, Grease, Jesus Christ Superstar, Joseph & The Amazing Technicolor Dreamcoat, Miss Saigon, Music Man, Oliver Twist and West Side Story.

After graduating from Canton Central Catholic in 1996, Ryan moved to Huntington Beach California to further pursue his musical career; he was the youngest production assistant to be hired at CBS Television at the age of 18.  Ryan was a regular performer at Club 49 in Long Beach California, Dolce’s in Newport Beach and at the Huntington Beach Yacht Club, and in 1998 he was the featured entertainer at the gala opening of Huntington Beach’s Pier Plaza.  While in California he performed with the Beach Boys, Dean Torrence (of Jan & Dean), as well as with members of The Coasters, The Platters and The Temptations.  In addition to his singing and theatre credits, Ryan’s television appearances include The Young & The Restless, Bold & The Beautiful and Silk Stalkings on the USA Network.  Ryan returned to Canton in 1999, and in 2004 he recorded the song “Here’s to the Lady” and “A Tribute to a Lady” for the restoration of the Statue of Liberty.  Recorded in New York City at Nola music studio with the famous composer Mr. Irving Fields.

This versatile and entertaining singer captivates the audience and always assures a successful, FUN and lively affair.