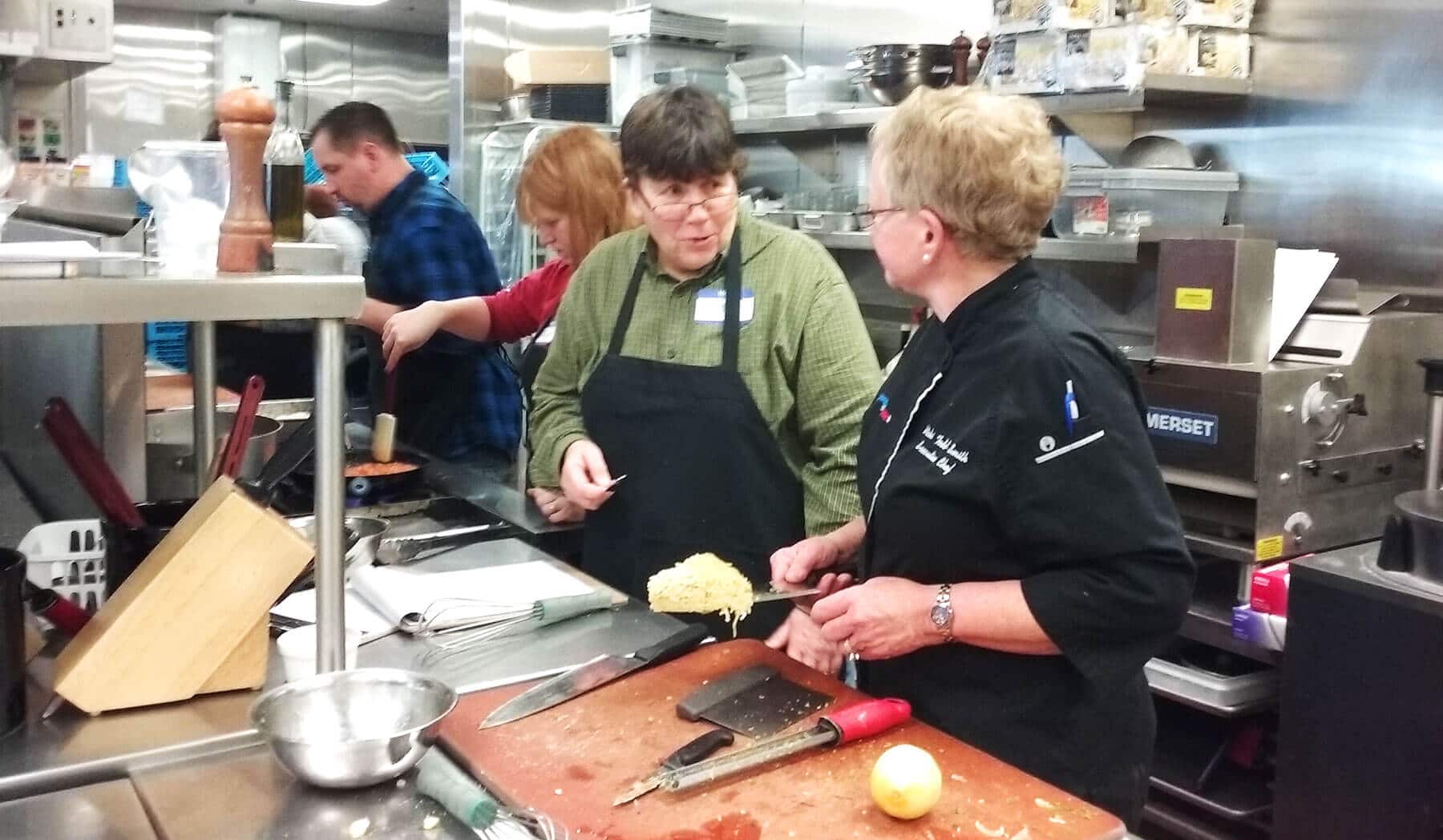 By Julianna Wilmoth, Director of The Cucina

Chef Vicki Todd Smith has been a culinary educator, caterer, mentor, and chef for more than 35 years. During that time, Chef Vicki spent over a decade in Europe and Asia before returning to the United States in 2000. She has had the honor of cooking for such luminaries as the late Prime Minister Benazir Bhutto, Anderson Cooper, Ken Burns, and the former Foreign Minister of Japan. Additionally, during her years in Asia she was the caterer of choice for many ambassadors and other members of the diplomatic corps. Upon her return to the United States, she was the seminal chef to develop the food and beverage program at Kent State University’s Stark Conference Center. Subsequently, she became Market Kitchen and Catering Director for Mustard Seed Market in Solon and went on to run corporate dining for Jones Day law firm in Cleveland. At present Vicki works for a privately held conglomerate as the Executive Chef of their corporate lodging and catering operations.

Chef Vicki is a wealth of personal experiences and professional knowledge, which she happily shares during her classes. One class, Oodles of Asian Noodles, is the follow-up to her spring class, Polenta, Pasta and Potatoes. Chef Vicki’s class will introduce authentic ingredients while making the recipes home kitchen friendly. Try one of her recipes, Crispy Noodle Cake with Tomato Beurre Blanc, from the previous class, and then sign up for an upcoming class. Chef Vicki’s classes will transform your taste buds and kitchen skills!

Preheat oven to 350 degrees F. In a large kettle of boiling, salted water cook the spaghetti until al dente and drain well. In a heavy skillet sauté the onion in the butter over moderately high heat, stirring until golden.

In a large bowl whisk together the eggs and cream. Add the provolone, mozzarella, ham, parsley, salt, pepper, sauteed onion and spaghetti, and toss the mixture until well combined. Transfer the mixture to a well greased 9-inch springform pan. Put the pan on a baking sheet, and bake the noodle cake in the middle of the oven for 45-50 minutes, or until the top is just firm to the touch at the center. Let the cake cool in the pan for 15 minutes and then chill in freezer to cool quickly.

In a skillet heat the butter over moderately high heat until melted, and add the garlic, tomatoes, salt and pepper. Bring the mixture to a boil, stirring. Lower heat and simmer on low until thickened. Add four tablespoons of butter, one at a time, waiting until each one melts before adding the next. Set aside.

Run a thin sharp knife around the side of the noodle cake, remove the side of the pan, and run the knife along the bottom of the cake. Cut the cake into 6 wedges. In a skillet heat 2 tablespoons of butter over moderately high heat, and sauté 3 wedges of the cake, turning them until they are golden brown and crisp. Cook the remaining wedges in the remaining butter in the same manner. Gently re-warm the tomato beurre blanc and serve with the noodle cake.

Check out more classes in The Cucina >